This Sanskrit name itself has religious overtone and a sort of emotional ring to it for the devout Hindus. This words separation two word Mukti & Nath. Mukti mean Salvation and Nath mean god and Nirvana so It holds great significance for all spiritual people in the south Asian sub continent. 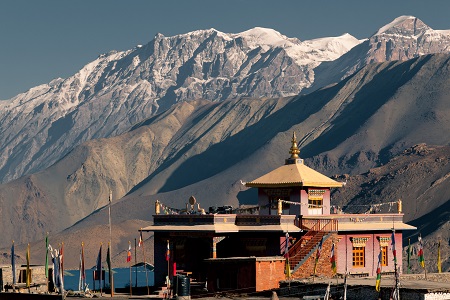 This Sanskrit name itself has religious overtone and a sort of emotional ring to it for the devout Hindus. This words separation two word Mukti & Nath. Mukti mean Salvation and Nath mean god and Nirvana so It holds great significance for all spiritual people in the south Asian sub continent. Muktinath (the provider of salvation) has been one such holy site, where thousands of devotees flock for attaining the much sought after moksha( freedom) from the cycle of birth and rebirth. It is an ardent wish or a dream if you may say, of every Hindu to get Mukti-Nirvana from this cycle taking births over and over again. It is belief of the Hindus that this world is "MAYA" (an illusion) and the earliest one gets out of it the better and a visit to Muktinath will help them achieve that goal. Since then it called Muktinath.

It is believed that one should visit this temple after completing pilgrimage of four special religious sites, Chardham Yatra of India; Muktinath must be visited once.

The famous Muktinath is a sacred & important pilgrimage place both for Hindus and Buddhists. It located in Muktinath Valley lies in the district of Mustang and is situated about 18 kms. Northeast of Jomsom in the north central part of Nepal, at an altitude of about 3800 meters at the foot of the Thorong La mountain pass (part of the Himalayas). The holy shrine at Muktinath is in a grove of trees and includes a Buddhist Gompa and the pagoda style temple of Vishnu Mandir, Containing an Image of Vishnu The site is close to the village Ranipauwa, which sometimes mistakenly is called Muktinath as well.

Named after highly referred Muktinath shrine the valley is one of religious place in Nepal for both Hindus and Buddhist. Hindus call it Muktichhetra (Place of salvation) is one of the four religious sites & It is also one of the 51 Sakti peetams.

Some people called this place Salagrama, Many Shaligrams found here are considered by Hindu as incarnation of lord Vishnu and worship them. According to Hindu Myth lord Vishnu turned into Shaligram because of Brinda’s Curse.

South Indian people called this place "Muktidham" It means holy pilgrimage place of salvation. Most of South indian People compulsory to visit this place in their life.

Similarly Buddhist calls this valley the Chumig Gyatsa which in Tibetan means 'Hundred Waters'. For Tibetan Buddhists Muktinath-Chumig Gyatsa is a very important place of Dakinis, goddesses known as Sky Dancers and one of the 24 Tantric places. They understand the Murti to be a manifestation of Avalokitesvara.